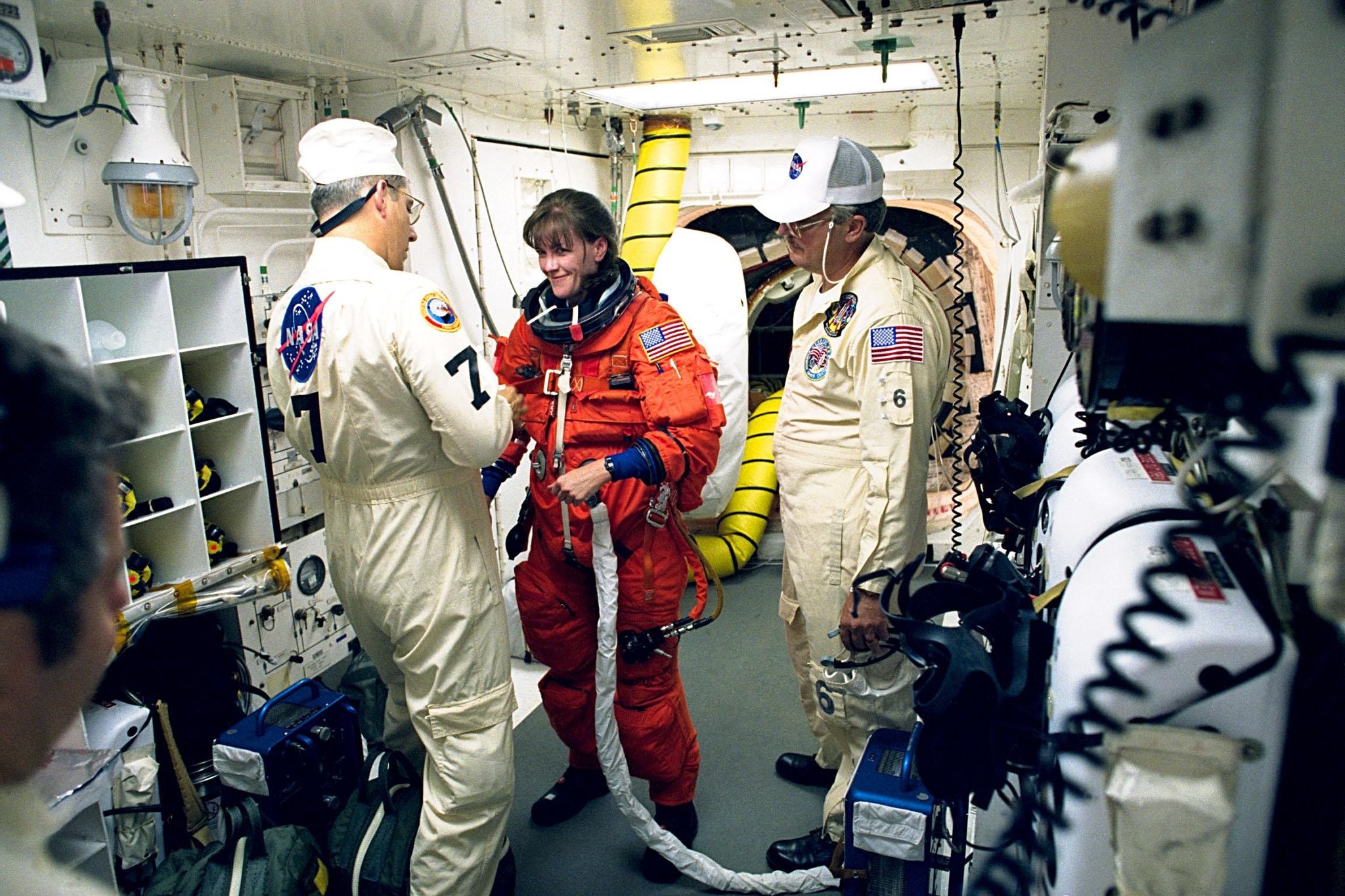 Every time an astronaut puts on an American spacesuit to conduct a spacewalk at the International Space Station, they pass through a portal installed in part by Janet Kavandi. It isn’t the only thing the former astronaut did that changed the work of her successors in space. After three missions to orbit, Dr. Kavandi moved into NASA administration, eventually overseeing how astronauts were selected. She’s credited with adding fairness to a process that for the first time chose an astronaut class that included as many women as men.

Melinda Gates commits $1B to ‘expanding women’s power and influence in the United States’ (GeekWire)
Melinda Gates, whose book this year documented the systemic and societal challenges that continue to face women around the world, this morning pledged $1 billion over the next 10 years to initiatives designed to accelerate gender equity in the United States. In a commentary announcing the plan on Time.com, Gates said the money will support “new and established partners taking innovative and diverse approaches to expanding women’s power and influence.”

CoSN releases interoperability toolkit for K-12 districts (edscoop)
Interoperability – the ability of disparate computer systems to seamlessly share information and integrate their capabilities with one another – is of critical importance for educators interested in operating effective and cost-efficient K-12 learning institutions. To this end, the Consortium for School Networking released an interoperability toolkit this week that bundles past resources created by the nonprofit group and also includes a couple new ones. The toolkit contains a quiz that allows institutions to self-assess their own systems’ interoperability, a calculator to estimate the costs associated with systems that don’t work well together..

SkyOp LLC, developer of industry-leading drone training courseware, announced that it has been awarded a cooperative purchasing contract to make its customizable SkyOp Drone Training Curriculum available to local school districts through the New York Boards of Cooperative Educational Services (BOCES). Under the state-wide agreement, SkyOp will deliver its proprietary workforce-development STEM curriculum directly to local districts while the BOCES will provide support and training for teachers and district staff to roll out the curriculum.

Indiana Schools Launch Esports Network (T.H.E. Journal)
An English language arts teacher has become the director for esports at his high school and kicked off a state-wide initiative to link up other Indiana schools interested in esports as well. John Robertson, who teaches at Tipton High, has launched the Indiana High School Esports Network, which currently has 13 members — all high schools (although middle schools are also invited to join).

Google to expand IT certificate to 100 community colleges (Education Dive)
Google plans to expand its professional certificate in information technology support to 100 community colleges, up from 30 currently, by the end of next year. The technology company has enlisted Jobs for the Future (JFF), a workforce development organization, to help colleges embed and customize the certificate for their IT programs. The expansion comes as several other major technology employers are partnering with colleges to craft curriculum focused on their products.

Sinclair Community College’s new Centerville learning center has helped the school receive national recognition for its cyber security education program. Sinclair is one of three community colleges in Ohio that earned the Center of Academic Excellence designation. This award is established by the National Security Agency (NSA) and the Department of Homeland Security, with the support of the National Science Foundation (NSF) and CyberWatch. The Centerville Learning Center is a key part of Sinclair’s cyber security program.

New White Paper Demonstrates the Potential of Adaptive Learning Technology to Help Drive Equity at Scale in U.S. Higher Education (McGraw-Hill)
A new white paper by McGraw-Hill, “The Equity Equation,” explores the potential of new teaching methods and adaptive learning technology to help drive more sustainable, equitable outcomes for millions of U.S. college students. In the paper, McGraw-Hill explores the potential of today’s best adaptive learning systems, which are grounded in learning science, to support students from all backgrounds and achievement levels. And it takes a close look at institutions that are effectively using adaptive learning technology to increase educational equity including Columbus State Community College, The College of Health Care Professions and Arizona State University (ASU).

Coursera opens its course catalog for colleges to scale gen eds, add training (Education Dive)
MOOC provider Coursera is making its courses available for colleges to include in their academic programs through a new platform called Coursera for Campus. The announcement follows a pilot in which more than 20 institutions worldwide used the new offering, which includes LMS and API integration and plagiarism detection. While Coursera is optimistic that the platform will fill a gap for colleges, how institutions will make use of it and other recent attempts to scale shareable, credit-bearing courses is uncertain.