In today’s STEMdaily, Lupita Nyong’o suprprises all-girls STEM school on GMA, NASA announces a woman astronaut will land on the Moon in 2024, a Microsoft grant will help train Miami-Dade educators in computer science, AEI reports names the best and worst metro areas to live in for STEM Jobs, and UVA profiles a student working in blacksmith engineering.

Students at an all-female STEM school in Atlanta received a huge surprise and a “Wakanda Forever” salute from Oscar-winning actress Lupita Nyong’o Thursday after being awarded with the “Most Likely to Succeed” superlative from our first-ever “GMA” Yearbook. Nyong’o gave the students an inspiring pep talk and awarded the school with a $25,000 check from DonorsChoose.org to go toward school supplies, classroom projects and more. “I feel like I’m looking into the faces of the future and it gives me deep hope to see how open, how alive and how positive that future could be,” Nyong’o told the all-female student body at the Coretta Scott King Young Women’s Leadership Academy.

Program encourages inclusive learning experiences for women of color in STEM (Indiana University)
A program that provides women of color in STEM with a space to discuss common issues about race and gender recently marked another successful semester at Indiana University Bloomington. The I Can Persist STEM initiative advances persistence among girls and women of color in the STEM disciplines of science, technology, engineering and mathematics through a multigenerational network of peers and professionals, as well as activities focused on career preparedness.

In one giant leap for women, NASA will land a woman on the moon by 2024 (Quartz)
NASA has announced that it will be sending humans to the moon again for the first time in almost five decades, reports CNN. Since moon landings began in 1969, only 12 humans have ever stepped foot on the lunar surface–and all of those people have been men. But that will change in 2024 when NASA sends the first woman to the lunar surface. Just five years from now, NASA will send one woman and one man back to the moon, landing on the lunar body’s south pole.

Lockheed Martin Funds Space Foundation STEM Program in Huntsville (SpaceRef)
The Space Foundation’s Space in the Community program began in Huntsville, Ala., thanks to funding by Lockheed Martin. Space in the Community is designed to help a community develop a STEM education and career pipeline to grow a community’s organic workforce and strengthen economic development. The program inspires students through hands-on activities, enables teacher support through professional development and propels the community to get involved through special events.

Thanks to a partnership between Raytheon and the Boys and Girls Clubs of America, the new STEMCenter of Innovation has been outfitted with new resources, such as a 3-D printer and robotics and video production equipment. The center will also have an education focused on the fields of science, technology, engineering and math to offer support and show the students how to implement STEM in their daily lives. The Fort Gordon STEM Center of Innovation is the first in the Army. Nationwide, there are 17 STEM centers for military youth.

Matt Stromberg swung a five-pound hammer in a smooth, steady arc, bringing it down with a sharp clang on a narrow piece of glowing-red steel, showering the immediate area with sparks. Stromberg, wearing a heavy leather apron over his “UVA Engineering” T-shirt and a bandana in University of Virginia blue on his head, is peacefully at home in the forge, surrounded by ancient and utilitarian tools used in the delicate art of shaping iron by hand.

Publishing giants McGraw-Hill and Cengage to merge (edscoop)
McGraw-Hill and Cengage, two major providers of educational content and services, have announced they will merge to expand and accelerate the accessibility of quality learning materials for students. Ranked as two of the world’s largest publishers in 2018 by Publishers Weekly, the two companies have worked independently for more than a decade to provide students with high-quality learning resources. As a merged entity, the new company — anticipated to be called McGraw Hill — has a projected cash revenue of 3.1 billion and will have the collective financial strength to expand its digital products and service and increase the number of students using them.

New Memphis program encourages more students to pursue careers in construction (Chalkbeat)
About 200 more Memphis students will be able to work toward certification in construction jobs next year thanks to a two-year state grant and an additional curriculum announced Tuesday. The after-school program, known as Pre-Apprenticeship Certificate Training, or PACT, is Gov. Bill Lee’s latest push to train more high school students to enter careers straight out of high school in areas such as masonry, carpentry, landscaping, painting, plumbing, and construction technology.

Jacky Rosen’s STEM bill heads to Senate floor (Las Vegas Review-Journal)
A bipartisan bill to bolster participation of young women in skilled education initiatives and computer science was approved by a Senate committee on Wednesday and now heads to the floor for consideration. The Building Blocks of STEM Act, sponsored by Sen. Jacky Rosen, D-Nev., was approved by the Senate Commerce, Science and Transportation Committee on a voice vote. The bill would create education initiatives and provide research grants.

Boosted H-1B Fees Could Pay for American STEM Training (DICE)
Fees for H-1B visas could jump in coming years, according to the Trump Administration’s fiscal year 2020 budget. “In FY 2020, the Department’s budget includes $160 million to continue our expansion of apprenticeship programs, along with a proposal to increase H-1B fee revenues to fund additional apprenticeship activities,” R. Alexander Acosta, the U.S. Secretary of Labor, said in prepared remarks (PDF)to a Senate committee on May 2. 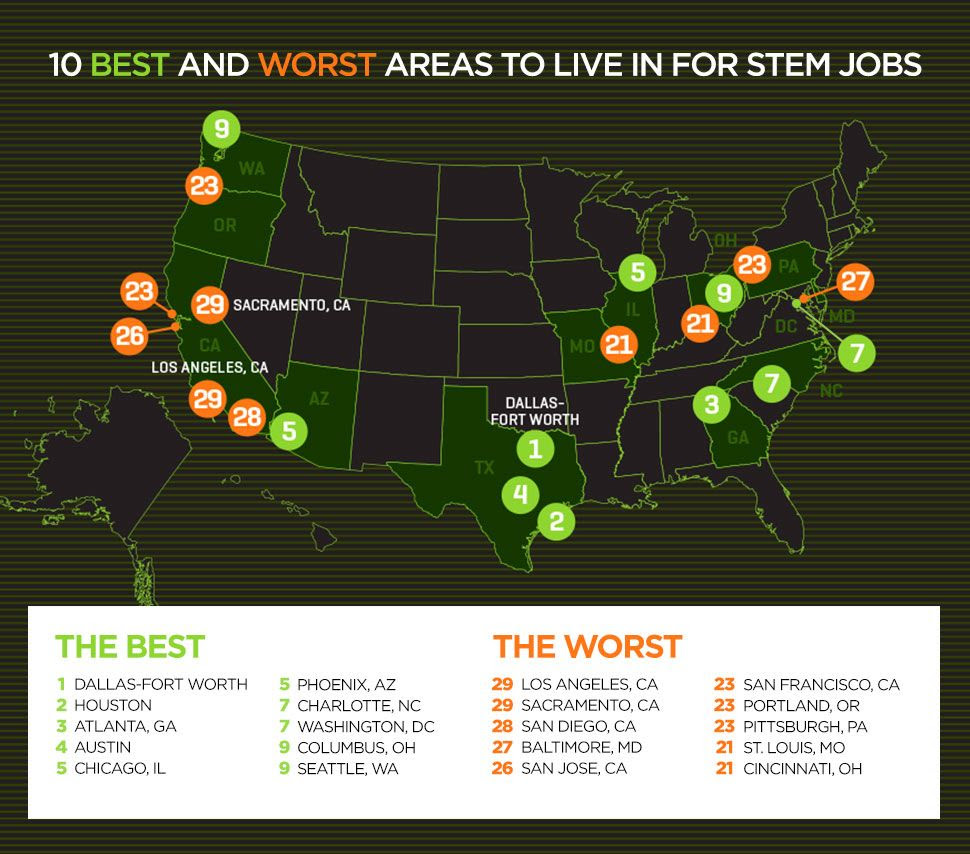 To rank the 30 STEM metros, the AEI Housing Center started with the 30 metros with the highest number of STEM jobs in 2018. It then took into account two other important factors. The first is total employment growth of any type since 1990, since a growing employment market is indicative of work opportunities generally and in the STEM sector. Second, the relative affordability for first time buyers (FTBs) is included because it is an important consideration for new and recent STEM graduates.