In today’s STEMdaily, The Atlantics covers teaching students to think at the Mississippi School for Mathematics and Science (MSMS), Lupita Nyong’o makes a big STEM donation to an Atlantic all girls school on Good Morning America, and the University of Florida partners with the U.S. Air Force to create a center to better fortify autonomous vehicles against cyber attacks.

K-12 Education
Can Schools ‘Teach Students to Think’? (The Atlantic) 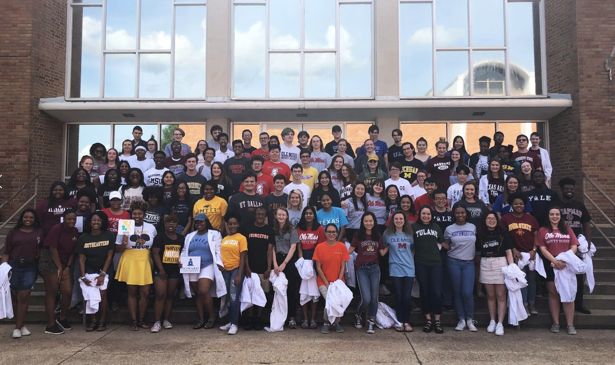 Last week I wrote about what Jim and I had seen on another visit to the (exceptional) Mississippi School for Mathematics and Science (MSMS), a public, residential two-year school for juniors and seniors. We’ve been reporting on the school over the past five years. In the latest dispatch, I described the way a committed English teacher at MSMS, Thomas Easterling, was “teaching students to think” through a rigorous analysis of the novel Dirty Work, by the renowned Mississippi writer Larry Brown.

Lupita Nyong’o surprises students at all-girls STEM school in Atlanta (ABC News)
Students at an all-female STEM school in Atlanta received a huge surprise and a “Wakanda Forever” salute from Oscar-winning actress Lupita Nyong’o Thursday after being awarded with the “Most Likely to Succeed” superlative from our first-ever “GMA” Yearbook. Nyong’o gave the students an inspiring pep talk and awarded the school with a $25,000 check from DonorsChoose.org to go toward school supplies, classroom projects and more.

As baseball players practiced on a damp field and basketball players shot hoops in the Apple Valley High School gym Saturday, the atrium was abuzz with the high-pitched whir of tiny propellers at the first Minnesota State High School Drone Racing Tournament. The Apple Valley Eagles hosted the St. Louis Park Orioles — coincidentally, the state’s only high schools with drone teams both have high-flying mascots. Students flew drones they built themselves that were small enough to fit in the palm of a hand. Some assembled theirs from kits, while others fabricated frames from a 3-D printer and soldered cameras on the top.

The vastness of the universe is in the palms of teenagers’ hands — all the more significantly for Lucie Courtois. Courtois, 18, is visually impaired. She and two friends with normal vision huddled this week around a laptop that, fed with code in the Quorum programming language, directs telescopes in Chile to capture images of asteroids. Quorum is simplified for blind users of screen-reader technology. The images the telescopes at the Cerro Tololo Observatory capture using its commands will be run through specialized software that converts the data points into sounds.

UF engineering college partners with Air Force for research (Gainesville.com)
The University of Florida has partnered with the United States Air Force to create a center to better fortify autonomous vehicles against cyber attacks. UF and the Air Force Office of Scientific Research (AFOSR) have launched a Center of Excellence for Assured Autonomy in Contested Environments at the UF Herbert Wertheim College of Engineering, the school announced Monday.

Tech Jobs Lead to the Middle Class. Just Not for the Masses. (New York Times)
Brittney Ball was living in a homeless shelter with her baby when she learned of a one-year program offering technical training, professional skills and an internship. She took the plunge. Five years later, Ms. Ball is a software engineer in Charlotte, N.C., earning more than $50,000 a year. A 30-year-old single mother, she has health insurance, retirement savings and plans to vacation in Mexico this year. “It showed me that I could do something different,” she said about the training program. “It really lit a fire under me.”

Wolf’s plan would inject millions into Pennsylvania career training, STEM(Pocono Report)
Lawmakers and local officials gathered Thursday at the Monroe Career and Technical Institute for a tour of the school’s facilities. The tour touted some of the successes of last year’s launch of the PAsmart program, a state initiative that provided $20 million to bolster STEM and computer science in schools and nearly $10 million to expand apprenticeships and job training. The visit also gave officials an opportunity to discuss new ways of improving the region’s career training offerings.

Increasing our investment in the innovation workforce (The Hill)

With thousands of U.S. technology positions remaining unfilled every day, the need to grow a larger, more inclusive STEM workforce is clear. The challenge? How to proceed. We can help close the innovation workforce gap if we expand our investments in three key areas — collaboration, inclusion and innovative educational policies — including reauthorizing the Higher Education Act.

Fact or Fallacy: What’s the State of Digital Learning in Schools? (EdTech Magazine)
What is the current state of digital learning in schools? Our own experiences, both positive and negative, can influence our perspective on this topic. As educators, we may have led engaging lessons where students explored a new place with a virtual reality tool. We may have seen the power of students building confidence for public speaking by participating in conversations online. At the same time, even the most tech-savvy of us have faced challenges with integrating digital learning experiences into classrooms.