In today’s STEMdaily, a brewery in Colorado raises money for STEM School Highland Ranch school shooting victim Kendrick Castillo and the robotics club he was a part of, NCWIT releases longitudinal study and roadmap for girls in tech careers, the University of Maryland announces it will open a campus near Amazon’s HQ2 in Northern Virginia, and an Axonify study finds 76% of workers would find an employer more appealing if it offered additional training “designed to develop their skills for the future.”

Blue Spruce Brewing Company held a fundraiser Saturday to help raise money for the robotics department at STEM School Highlands Ranch. “We’re here to support the school,” parent Kathy Butler said. The brewery sold pint glasses at its Centennial and Littleton locations in honor of Kendrick Castillo, who died protecting his classmates during a shooting at the school last May. “He was always happy. He was always trying to make somebody laugh,” owner Theresa Kane said. Kane, a former Spanish teacher at STEM School Highlands Ranch, wanted to support the robotics department because Kendrick was passionate about it.

If Personalized Learning Is Going to Work, Teacher Onboarding Must Improve. Here’s How. (EdSurge)
In 2017, at the end of our third year of implementing personalized learning at Dallas ISD, our central personalized learning team conducted a series of stepback meetings with school leaders. We wanted to learn their biggest concerns around implementation, along with what was and wasn’t working for them. One thing consistently bubbled to the surface in these meetings: The way we were exposing teachers to personalized learning was more focused on the what and less about the how. This “a-ha” moment quickly sent us back to the whiteboard to redesign the overall onboarding experience. 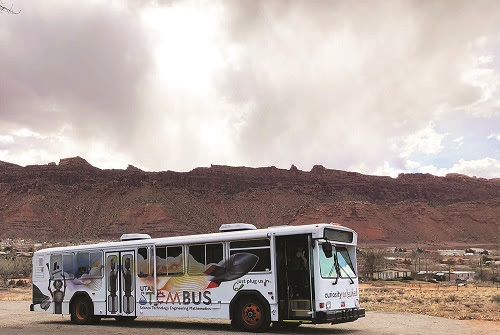 Marathon Petroleum Corp. was recognized at the 5th annual STEM Best Practices conference for its commitment to funding STEM education. Marathon provides the support for the Utah STEM Bus that travels to schools around Utah to increase access to STEM activities for students. The company was presented with the STEM Dynamo Award in recognition of “their outstanding support of STEM education.” “The support from company partners, such as Marathon Petroleum, increases the STEM Action Center’s ability to reach more students and create innovative programs that help Utah students to dream big, and do big,” said Allison Spencer, director of the Utah STEMFoundation.

New NCWIT Study Outlines Roadmap For Bringing More Girls Into Tech (Forbes)
The National Center for Women & Information Technology (NCWIT) has released one of the few longitudinal studies of girls and technology study, and one of the even fewer to span high school, college, and beyond. According to the six-year study, giving girls access to computer programming courses in high school supported by strong parental and teacher engagement is one of the most important factors in ensuring they will persist over inevitable obstacles to continue studying computer science in college and eventually enter a tech career.

Women working in STEM can take advantage of inclusionary learning spaces to further their prospects in male-dominated fields. But insecure men just can’t fathom being excluded. The U.S. Department of Education has launched more than two dozen investigations into female-only STEM academic programs offered at UCLA and UC Berkeley, as well as other colleges across the nation. Investigations began over concerns of female-only programs, scholarships and summer camps violating Title IX’s goal to eliminate sex discrimination in higher education.

The liberal arts degree is alive and well – and critically important to the future of tech (CNBC)
While digital skills like coding and data science are important, it’s the soft skills – a strong work ethic; self-motivation; social, emotional and leadership skills; and holistic skills (like problem-finding) that are truly the key components for success in the modern economy. By investing in liberal arts graduates, we gain people with human-centered skills who can approach problems in entirely new ways, contributing to out-of-the-box thinking in a digital age.

U of Maryland plans center near Amazon’s HQ2 (Education Dive)
The University of Maryland announced this week it is opening an 8,000-square-foot hub that will feature meeting rooms and spaces for collaboration, in Arlington, Virginia’s Crystal City neighborhood, home of Amazon’s forthcoming second headquarters (HQ2). Called the Discovery Center, it intends to be a space for academics, business leaders, students and locals to meet and use. It will host lectures, symposia and other events on subjects such as cybersecurity, machine learning and cloud computing.

More than 60% of employers are now willing to hire applicants with less than the required work experience (CNBC)
Job seekers have the upper hand in today’s labor market – so much so that employers are beginning to be more flexible in order to bring on new talent. In the last year, nearly 40% of companies have eased their job requirements in order to fill vacant roles, according to a new survey from Adecco USA. The recruiting and staffing firm for temporary workers asked over 500 hiring managers about what efforts they’re using to widen their candidate pools. About half of respondents represented employers in manufacturing, industrial, call center or transportation fields, while the remaining respondents came from all other industries.

Only 41% of employees say their employers are training workers in preparation for the future, a new Axonify study found. The microlearning platform’s State of Frontline Workplace Training Study, conducted by global market research firm Ipsos in June, showed that nearly one-third of frontline workers don’t receive any formal training. In key highlights of the study, 76% of respondents said that an employer would be more appealing if it offered additional training “designed to develop their skills for the future.”

Six states announce adult learning initiatives (edscoop)
Over the next 18 months, six states will develop data-driven strategies to connect their residents to local job opportunities. Through a partnership between the National Governors Association and Strada Education Network, a nonprofit focused on supporting workforce initiatives, the Educate for Opportunity Project will help support training initiatives for adult learners in Minnesota, Massachusetts, Ohio, Pennsylvania, Louisiana and Wyoming. The project aims to strengthen local economies and help people advance their careers in the regions’ emerging industries.