Connecticut joins over 40 states in national movement to advance women and girls in STEM (Connecticut Lt. Governor Bysiewicz)
Lt. Governor Susan Bysiewicz has been named the Connecticut Honorary Chair of the Million Women Mentors’ (MWM). Connecticut now joins governors, lieutenant governors, members of congress, and other leaders from over 40 other states in a national movement aimed at advancing girls and women in STEM programs. “Time and time again, women and girls have proven that they can succeed in the STEM field when given the necessary resources to excel. The goals of the MWM movement directly coincide with the work being done by the Governor’s Council on Women and Girls’ to advance women, gender equality, and opportunity in our state. Mentorship is an important step to helping women and girls further their STEM careers and I am dedicated to making sure Connecticut will provide it,” said the Lt. Governor.

The test results that best explain the STEM gender gap are not the math scores (Quartz)
Research has shown that stereotypes – along with factors like test-taking anxiety, social norms, and the discomfiting experience of being a girl in male-dominated environments – play a role in dissuading girls from pursuing careers in STEM. Now, a new study offers another intriguing explanation: Perhaps there are fewer women in STEM not because girls are worse than boys at math, but because they’re significantly better than boys at reading.

The Regeneron Science Talent Search (Regeneron STS) is one of the oldest science competitions for high school seniors and provides an important forum for original research that is recognized and reviewed by a national jury of professional scientists. Alumni have made extraordinary contributions to science and have earned many of the world’s most distinguished science and math honors, including thirteen Nobel Prizes. Each year, Regeneron STS scholars and finalists compete for $3.1 million in awards. The deadline to apply is November 13, 2019 at 8pm ET.

STEM School hoping to get new Mars rover named after Kendrick Castillo (FOX Denver)
STEM School Highlands Ranch is leading an effort to get NASA’s next Mars rover named after Kendrick Castillo. NASA is holding a nationwide competition to name the new rover. It is asking students to write essays explaining what they want the rover to be called and why. Students from kindergarten through 12th grade can submit essays. The deadline is Nov. 1, 2019. Castillo, 18, was killed in the STEM School shooting in May.

‘Young Sheldon’ & Chuck Lorre Foundation Support Teachers, STEM Projects (Deadline)
CBS’ Young Sheldon and the Chuck Lorre Family Foundation are partnering with DonorsChoose.org with a $200,000 matching gift to support middle school applied science projects. The foundation is continuing its support of public school STEM site for school projects tagged with the Young Sheldon logo (Season 3 of the series premieres Thursday). To date, teachers at 83% of the nation’s public schools have created a classroom project request on the website.

Virginia Tech Ranked #1 for Cybersecurity (Prince of Petworth)
Virginia Tech’s 100% online Master of Information Technology program has been ranked the No. 1 online graduate degree for cybersecurity nationwide in the 2019 rankings list from CyberDegrees.org, a Washington, D.C.-based company. In addition, the program was named one of the three best online graduate information technology programs nationwide for the seventh consecutive year in the annual rankings from U.S. News & World Report. 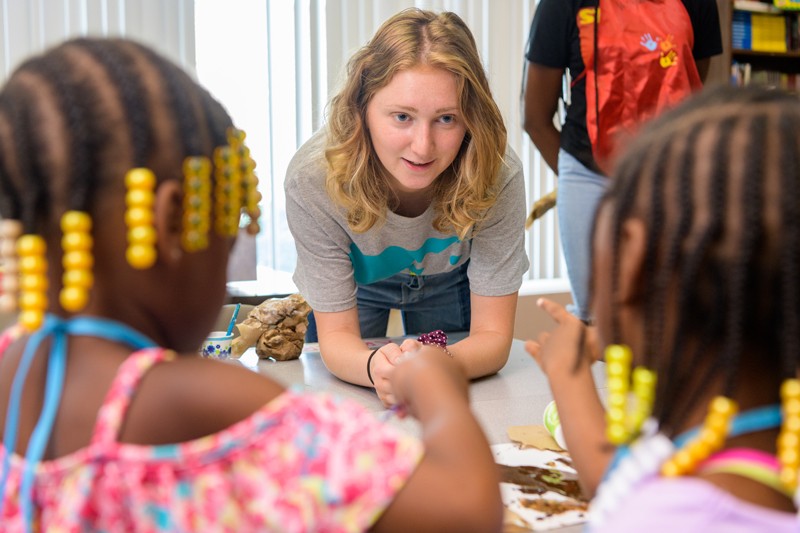 A small group of University of Delaware students majoring in science or engineering spent the summer engaging children and teens in activities related to STEM as part of a new initiative designed to interest more undergraduates in teaching careers. At UD, the College of Arts and Sciences (CAS), which includes the University’s Center for Secondary Teacher Education programs for prospective middle-school and high-school teachers, is beginning an initiative to address the problem by raising awareness about teaching careers among undergraduates and faculty in STEM fields.

Indian Giant Infosys Opens Tech Center in Phoenix, Partners with ASU (Getting Smart)
“With very low unemployment – almost zero in tech – we’re hiring from campuses,” said Infosys CEO Salil Parekh. The Indian tech giant hired 15,000 graduates in the last 12 months, including more than 2,000 in America, where many come through community college partnerships. “We hire people with adjacent skills and put them through our training program,” explained Parekh. To build customer proximity and a talent pipeline, the Bangalore-based tech leader opened a campus in Phoenix last week at Skysong, the innovation center at Arizona State University (ASU). By 2023, the tech services company plans to employ 1,000 Arizonans.

Why Western Governors U thinks microcredentials are the path to degrees (Education Dive)
Projections that the pool of traditional students will shrink, wariness of continued tuition increases and limited growth in state support for higher education are prompting institutions to shake things up. In many cases, that means making themselves available throughout learners’ lives as their education needs change. Doing so requires strengthening connections with local employers. Already, colleges and businesses are coming together to map the skills needed on the job to those offered in a certificate or degree, and some are even developing shared credentials.